To keep the hook-shaped blade of a khopesh safe from rusting, damage and also ensure you remain safe while carrying this sword, a scabbard is necessary. Khopesh scabbard is simply a protective gear for the sword and also for the carrier. Without ensuring proper protection, the sword blade has every bit of chance of rusting.

And if the hook-shaped blade alongside the sharpened outside edge loses the quality, the sword will remain of no use. There are both leather and metal scabbard available. They are used depending on the sharpness of the blade edge. 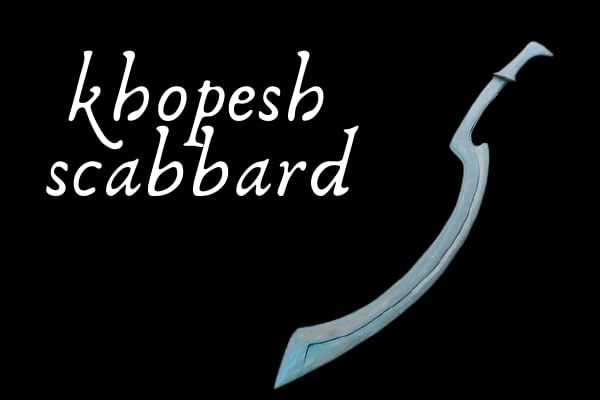 Khopesh is an ancient Egyptian battle sword, which has a sickle-shaped blade. The sharpened side of the sword is on the outside edge, not on the hook-shaped end. During the Bronze Age, khopesh is regarded as one of the most influential weapons.

Why is a scabbard necessary for a khopesh?

The sheath or protective cover that holds the large blade of a sword is called a scabbard. This is used to keep the sword blade away from damage and also safe others from the sharpened edge of the blade.

What is a khopesh scabbard made out of

Most commonly a khopesh scabbard is made out of leather or wood. However, it is always cool if you use a metal scabbard to keep the sword protected. The construction of a scabbard mainly depends on the sharpness of the blade, and not every time a leather scabbard is going to be ideal for the blade.

What is the purpose of a scabbard?

When you are carrying a weapon into the battleground, you may hold it or keep it along your body. In the second case, it is necessary to ensure your own safety from the sharpened edge of the sword blade. That is when a scabbard comes in handy.

A secondary sword must be covered inside a scabbard. The covering should be protective and allow the user to bring out the sword in use quickly when required.

What is the significance of khopesh?

Khopesh is almost a similar weapon compared to a battle axe, but the innovative style does make it a significant weapon on the battlefields. It was used by the Egyptians during the Bronze Age.

Why was the khopesh sword used?

Khopesh is mainly a slicing and cutting weapon. But as it has an axe like design or simply a hook design, it also allows hacking the opponents.

Why is khopesh never been used since ancient Egypt

There are different points of view available regarding the question, why this famous khopesh never has been used since ancient Egypt.