From the historical point of view broadsword and longsword are pretty similar swords. Longsword comes with typically a longer grip than most other battle swords. They have double-edged blades and the user mostly needs two hands to operate the sword. 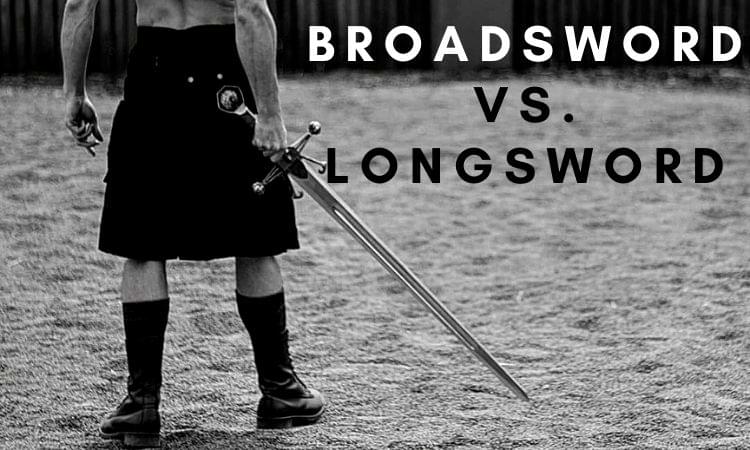 What are the differences between a broadsword & a longsword

After reading the description, one thing is sure that although broadsword and longsword have a bit of similarity, they are different in many ways.

The mismatch is size Even if we don’t take the length of these two swords, there is a huge difference between the width of the blade of longswords and broadswords. As the name indicates, broadswords have a broader blade than a longsword.

Many ones might ignore this point, but actually broadswords are heavier than longswords. There are two reasons behind this heavier structure, the basket-hilted grip and the wider blade.

The longsword comes with a longer hilt than usual, which is the main feature of the sword. However, the broadsword doesn’t have much a longer hilt but it has a basket-shaped guard design around the hilt. Also, the blade width makes it different from a longsword.

Both these sword does a great job in cutting and slicing. But longsword provides an extra type of attack, which is thrusting. 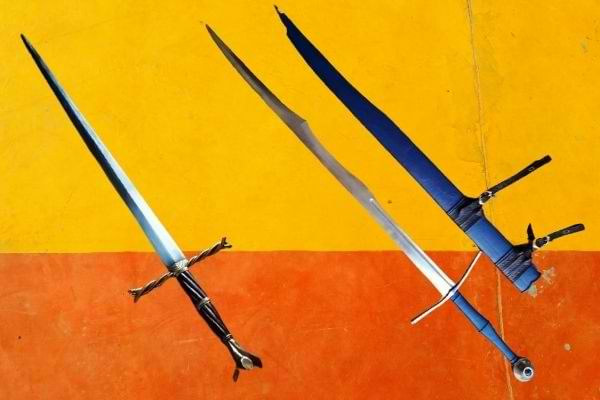 If you think that longswords .pdf have longer blades, then you are completely on the wrong track. Longswords are referred to as longswords because of their longer grips, not for longer blades. The blades of these swords are almost similar lengths to most swords, but the grips are longer than traditional grips.

While talking about the size of the sword, we have to know about the two parts that constitute it. There are two parts in longswords, the blade and the hilt. The length of the blade of longswords ranges from 33 to 43 inches or 85 to 110 cm.

On the other hand, the cruciform hilt of longswords measures 6 to 15 inches or 16 to 39 cm. However, on average, longswords are 39 to 51 inches or 100 to 130 cm long. But what makes the sword totally different from other swords is the longer hilt.

Longswords stay on the heavier side among all swords. The reason behind this is the longer hilt. The longer hilt and heavier design make it a two-handed sword. These swords weigh around 2.4 to 4 pounds or 1.1 to 1.8 kg on average.

Longsword is a two-handed sword that has a cruciform hilt with a grip. Although it’s a double-handed sword, some swordsman will still use it as a single-handed sword. The longer grip allows the user to have a stronger grip on the sword using both hands.

The blade of the sword is straight, not curved. The swords come with double-edged blades. However, there is a difference noticeable in the cross-section, length, and width of the blade. Due to its design, it can also be defined as a hand and a half double-edged sword with a simple cross hilt.

Longsword is a European sword, which was mostly used in the late medieval period and renaissance periods. However, these swords began their journey back in the 11th century and are still being used.  But the prominent use of these swords is noticeable from the 12th century to the 17th century.

They are also referred to as Bronze Age swords, migration period swords, and Viking swords. Due to its popularity in the 14th century, it was commonly used from the year 1250 to 1550. These swords were also used as a military weapon of the earlier phase of the hundred-year war.

In the late medieval period, this sword was used by wielders to use full plate armor doesn’t matter whether he is on foot or horseback. Longswords are also known as bastard swords.

Longswords are made for heavy striking, slicing, and thrusting the sword into the opponent’s body as well. With the use of both hands, the user ensures a strong grip and through the dominant hand, it creates the cutting movement. Through this sword, one can do over-cut, middle-cut, and under-cut.

The double edge structure of the sword helps to slice the object with efficiency. The slice attack works by positioning one of the edges on the object and pushing or pulling with force. Thrusting is only possible when the sword has a pointed tip.

The user has to swing the pointed tip in a straight line towards the target for thrusting.

It is pretty similar to the longsword but has a wider blade. Another difference between broadsword and longsword is the basket-hilted design.

The basket used in the hilt area keeps the hand of the user safe while combat or battle. Unlike a longsword, it is a single-handed usable sword.

The size of broadswords is closely related to the size of longswords. Often their sizes are referred to as being the same. However, the difference is done when the question arises regarding the width of the broadsword’s blade. Like longswords, they also have a double-edged blade.

But the blade of broadsword is 2-3 inches wider typically, which is the main reason for calling them broadswords. On average, the length of broadswords ranges from 30 to 45 inches.

Broadswords are a bit heavier than longswords because of having a basket on the hilt and a broader blade. On average, broadswords weigh around 3 to 5 pounds or 1.4 to 2.3 kg. Instead of this increased sword weight, they are easily handled with a single hand.

The distinguishable design of the swords, which makes them different from the longsword is the basket-shaped guard in the hilt. It is used here to protect the user’s hand. The basket also allows the user to use the sword as a single-handed one, even though it is a bit heavier than a longsword.

The sword is constructed with a single-edged blade design. And the blade is broader than most other sword blades, which makes it different from longsword as well as other swords.

A broadsword is a military sword. It is also one of the earlier medieval swords, which was introduced back in the 6th century. However, the basket-hilt design gained its popularity during the 16th and 17th centuries. And throughout the whole 18th century, it was heavily used.

A broadsword is a type of sword that is used for close contacts. It is mainly used for cutting and slicing. The sharpened double-edged blade cut or slices the object quite efficiently. For this, it is mostly known as cutting special weapons.

Both broadsword and longsword have their own specialties and characteristics. Now which one you prefer is up to you. But one thing is sure, after reading the article top to bottom, you can distinguish the differences between these two swords for sure.