There few more dissimilarities between energy sword and lightsaber, which distinguish the differences quite well. If you are interested in having in-depth details about these two weapons, you must continue reading. 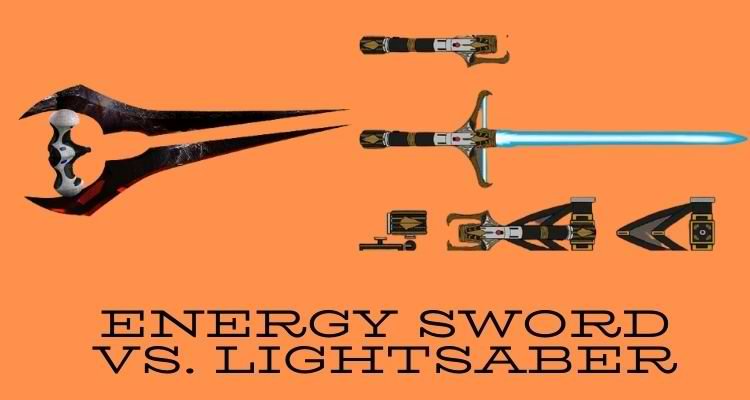 What is an energy sword?

The energy sword is a sci-fi weapon, which is used by the Sangheili of the covenant empire. It is a single-handed weapon. The Sangheili assumes it as a holy weapon. Now let’s talk about different aspects of this weapon in detail.

This one-handed weapon comes with a curved hilt design. The curved hilt houses an energy storage module and a device, which is used to project plasma and ultimately forms the blade. The weapon is designed with two partially ionized blades, which creates the oval-shaped ionized blades.

The ionized blades have free moving electron-based gas, which is held in a blade-like form by two small magnetic field generators built into the handle.

As the sword is made of one-handed use, the weight isn’t too much. Swords used in both editions weigh around 2.36 kg.

Energy swords are used by the Sangheili in close-quarters combat. The sword produces melee fire during the fights.

There are several colors available for energy swords including green, blue, yellow, orange, purple, and so on. But the matter is the colors have nothing to do with the performance of the sword. It only changes the outer look of the weapon.

A lightsaber is another sci-fi weapon, which is typically used by the Jedi, the Sith, and other force-sensitives in star wars. This type of sword produces a laser light for which is also known as a laser sword. Let’s talk about some crucial details of a lightsaber.

The design of the sword often makes it comparable to some real-world swords like katana, broadswords, or rapiers. The hilt is made of metal.

Aesthetically, lightsaber comes with a longer blade, which provides a better reach to the opponent during any fight. The length of the sword varies from 32 inches to 36 inches. It might seem sometimes the sword becomes heavier when it is turned on due to the strong force created.

Typically the blade of the sword has the minimum weight, but the other parts of the sword define the actual weight. In most cases, lightsabers weigh around 2 pounds.

There is a Kyber crystal designed on the hilt of the lightsaber, from where the power of the saber comes. Although the crystal is small, they are very crucial in producing the power. Moreover, there is no definite use of the sabers as they require no manual charging.

Another interesting side is that you can manually turn on and off the power of the lightsaber through the switch situated in the handle.

Lightsabers are used for both offensive and defensive fights. They are specialized for melee combats as well.

Related post : What is a better weapon a battle axe or a sword

Energy sword or lightsaber: Which one is better

Before going on to the final decision and keep one of these weapons over another, let’s compare the two weapons first in detail. If you want to know the cost of sword see the article.

The hilt design of the energy sword allows only one-sided handling. If the user tries to do change the grip style, he will endanger his wrist literally. On the other hand, lightsabers are good to operate anyhow the user likes. It also allows the weapon to use a guard.

The easiness in handling the weapon makes the lightsaber a worthy option to create a shield against the opponent’s strike. The user can defend him with a lightsaber, but not with an energy sword.

Except for combat fights, lightsabers can be used as defensive weapons. In both offensive and defensive manners, the sword performs well. Also, it is used as a great cutting tool.

The main problem with energy swords is the battery life. With every successful strike, 10% of its battery is drained. It means you can only produce ten strikes from this weapon and it is used only when it recharged. But lightsaber lasts forever requiring no recharge as long as the Kyber crystal functions well.

One superb side of the energy sword is the quieter operation. You can get ready to defeat the enemy without making any noise. But lightsaber produces heavy noise while manually turning on.

One needs to be skilled and properly trained to operate a lightsaber, but an energy sword doesn’t require such skills or training.

From the above discussion, it seems that lightsabers are a clear winner compared to the energy sword.

After reading the detailed discussion about the energy sword, you might be thinking what are the advantages and disadvantages of this weapon? Here are they.

Advantages and disadvantages of lightsaber

Now let’s get through the good sides and bad sides of the lightsaber, even it is a clear winner in the battle against the energy sword.

Whichever of these two weapons is the winner is not a matter of concern here. If you dreamt of handling one of these swords someday, you should rely on your preference.