A short sword typically has a 12 to 24 inches long blade, and it is called a short sword because of the smaller blade and hilt.

The short sword is the shorter version of the longsword because there are a lot of similarities between these two swords except for the length.

The shorter length also makes it a compact weapon and a lightweight one too. Through a short sword, it is possible to stab or thrust the weapon inside the opponent’s body. And the sword has a sharp point designed for this. There are more details about short swords discussed in the following sections of the article. 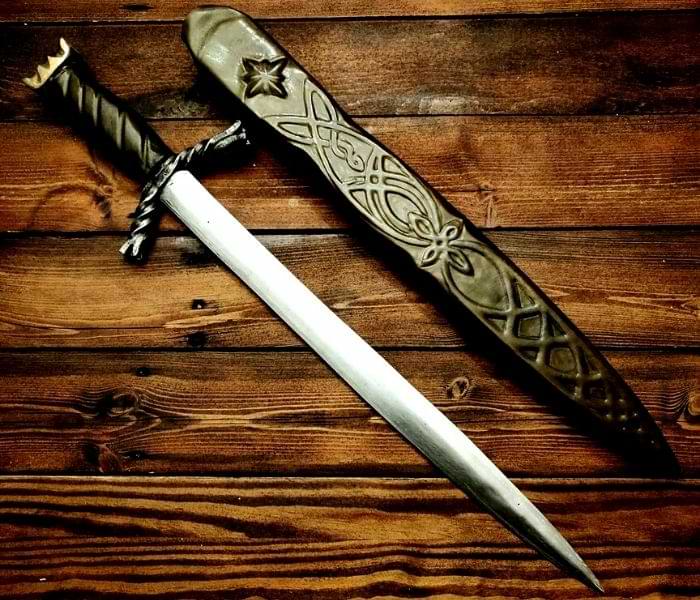 What is a short sword?

Neither too small like a dagger nor too long like a longsword, and the sword that stands between these two types is called a short sword.

Short sword is a compact weapon, which is mostly used as the secondary weapon on the battlefield. They are not used as one of the deadliest weapons, but they can do good damage in hand-to-hand combats.

They are often regarded as the smaller version of longswords because both these swords have pretty good similarities. Whether the sword falls in a short sword category or not is basically defined by the length of the blade. The blade is shorter than normal swords but longer than a dagger or knife.

How long is a short sword

The blade of a short sword typically ranges from 12 to 24 inches long. The length varies depending on the type of short sword you are using.

The length of the blade makes it shorter than traditional swords and also makes it different from smaller weapons like dirk or dagger.

Due to its length, which remains within longer swords and daggers, it can also be called a medium-sized sword other than short swords. However, the overall length of the sword can go up to 30 inches with the grip or hilt part.

It means the hilt used in a short sword is also on the smaller side. The overall length of the short swords including the hilt or grip mostly remains within 1.5 feet or 18 inches to 2.5 feet or 30 inches. And handling a 30 inches sword isn’t a big task of course.

The compact size of the sword allows the user to carry it with ease on the battlefield as a secondary weapon. And it comes very in handy during combats or close battles.

How heavy is a short sword

There has been a lot of evolution in the design and also in the size of the short sword. So the change in the weight of these swords is a noteworthy thing. Typically, due to their compact design and smaller size, they are supposed to be lightweight swords than most other traditional length swords.

And they are on the lighter side as the weight remains around 2 to 3 pounds on average. However, the ancient versions of the swords were a bit heavier compared to the newer versions. They are made using heavier materials.

The previous models of short swords weighed around 4 pounds approximately. So the overall weight of these swords ranges from 2 to 4 pounds or 0.9 to 1.8 kg. The weight is enough to carry these swords as an additional weapon in war fields.

Design of a short sword

A short sword neither looks like a dagger or small knife nor looks like a Broadsword or Longsword completely. But it’s a sword that stands between these two types of swords. Due to its similarity in the design with the longsword, it is often regarded as the smaller version of the longsword and the design proves that it is quite legal.

This type of sword comes with almost similar parts to a longsword. Although the blade here is smaller than longswords, they are similarly designed with double-edged blades. Also, there is a cross-guard designed on the swords. Longswords are called long because of their lengthy hilts.

In contrast to a longsword, a short sword comes with a shorter hilt. However, the design of the hilt is similar to the longer swords. There is a comfortable grip with a pommel designed on the hilt of the sword. There is an extra feature added in the double-edged blade, which is typically not found in longswords.

The blade has a sharpened point, which makes it capable of thrusting or stabbing into the opponent or target to defeat him. The shorter length alongside the pointed tip makes it worthy for thrusting. Also, someone with a short sword has a curved, single-edged blade.

What is a short sword used for

Short swords are not used for primary or main weapons on the battlefields, rather they are mostly known as the first choice for many soldiers as their secondary weapon. The smaller size and lightweight nature of the sword make it a suitable one for quick operation during any war.

The reason behind not using short swords as primary weapons are the shorter length of the blade. The shorter length makes it difficult for the wielder to reach his target swiftly in the war, and even when he is riding on horseback, the sword becomes almost useless.

However, some small races of fighters in the ancient ages used these smaller swords as their primary weapon as well. Short swords are really effective where normal swords are not. For example, when the opponent is near you and you can defeat him by thrusting a sharpened weapon inside the heart, you should use your off-hand and operate a short sword.

The pointed head of the blade is designed for thrusting purposes. Another reason behind not using a short sword as the primary weapon is that they are not as harmful as the longer blades in wars. However, they are an excellent choice for combats.

Short swords have been used since the medieval age as one of the favorite secondary weapons on the battlefields. The warriors loved carrying this lightweight, small-sized weapon somewhere around the waist on the battlefield as a backup weapon. They used the off-hands to operate the sword.

Other than the medieval age, the use of short swords was prominent in the Roman Empire also. But Romans didn’t agree that their swords, which were called Gladius are the short sword. However, the short sword is a leading weapon in the European states as a self-defense weapon.

Mostly, the compact design allows common people to carry this type of sword to protect themselves from unwanted harm in any circumstances.

According to historians, there have a lot of short swords used in the wars. Let’s have a quick look at different short swords.

The short sword is indeed a favorable choice as the secondary weapon on the battlefield. However, it is a good one for hand-to-hand battles or close combats as well.