The weight of swords depends on the type and also the size of the sword. Ancient swords tend to be heavier commonly. After taking all types of swords, the average weight stands around 2 to 5.5 pounds. Converting it to kilograms, the weight ranges from 0.9 to 2.5 kilograms. 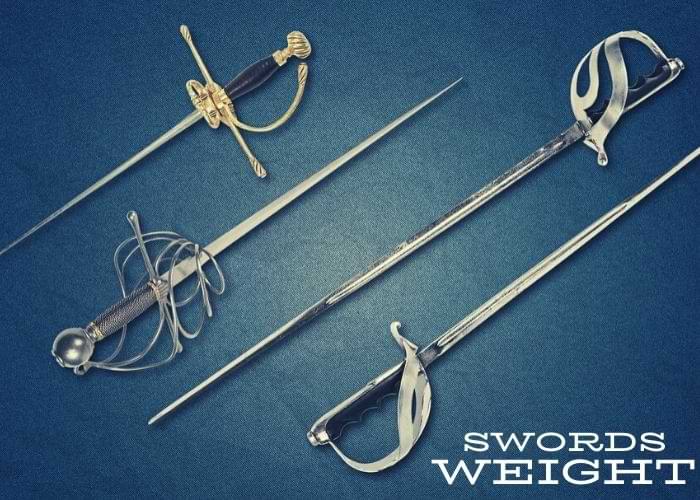 Types of swords and weight

As the name indicates, one can operate the sword with one hand and the weight should be less enough for one-handed use. Swords in this category typically weigh around 2 to 2.5 pounds or 0.9 to 1.2 kg when converted to kilograms.

Two-handed swords are a bit heavier than one-handed because of their design. And the user needs to use both his hands to operate the sword. The medieval heavyweight swords were mostly two-handed and these swords weigh around 2.2 to 5.5 pounds or 1 to 2.5 kilograms.

Now let’s check out the weight of different swords quickly through the table.

If you want to know about swords cost view the link. 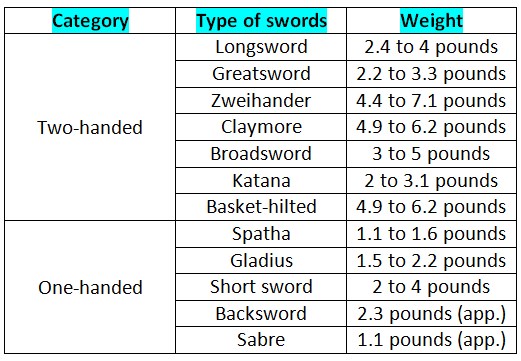 There are two main parts of a sword, the hilt and the blade. After hearing the name of the longsword, you might be assured of the fact that it has a longer blade. But the reality is, the sword is known for its longer hilt or handle.

The handle was designed for two-handed use and kept long enough for the purpose. The weight of longswords ranges from 2.4 to 4 pounds or 1.1 to 1.8 kg on average. The sword has a straighter double-edged blade designed, which approximately measures from 33 to 43 inches.

However, the lengthy handle of the swords measures 6 to 11 inches making it a perfect one for two-handed use.

How much does a greatsword weigh

The term greatsword is closely related to the longsword because it is actually the swords used late in the medieval age. Greatswords typically weigh from 2.2 to 3.3 pounds or 1 to 1.5 kg. The design of these swords is similar to longswords coming with a pretty long grip.

How heavy is a Zweihander

Zweihander is a powerful type of longsword, which is regarded more than a sword. The larger size of the swords increased the weight a lot and on average the weight ranges from 4.4 to 7.1 pounds or 2 to 3.2 kg.

The word Zweihander itself stands for a two-hander. The larger size makes it appropriate for two-handed use. On the hilt area, the grip is cruciform for both hand use and has a pommel. This type of sword is designed with a double-edged, straight blade.

Weight of a claymore

Coming with a cross-hilt design, claymore also falls in the category of two-handed swords. It is also regarded as similar to basket-hilted swords. The average weight of claymore is around 5.5 pounds or 2.5 kg, which is of course on the heavier side.

Meanwhile, the overall weight ranges from 4.9 to 6.2 pounds or 2.2 to 2.6 kg. The blade of these swords is double-edged and measure around 39 to 47 inches in length. The swords are designed with a two-handed cruciform hilt with a pommel.

How much does a broadsword weigh

Broadswords were known for their sharp blades in the middle ages. They are also two-handed swords, which can cut or slice anything in just one single stroke. The weight of broadswords ranges approximately from 3 to 5 pounds or 1.4 to 2.3 kg.

The sharp blade was double-edged and it was 2-3 inches wide. However, the overall length of the swords ranges from 30 to 45 inches. Due to their sharp blade, they are mostly known as cutting weapons.

A nice straight sword is what most beginners love to handle because of its lighter weight. Roman Spatha is such a kind of sword, which weighs less than 1 kg, around 0.5 to 0.7 kg or 1.1 to 1.6 pounds. The swords were used back in the 1st to 6th centuries AD in Roman Empire.

The overall length of these swords ranges from 19.7 to 39.4 inches. And the handle itself is 7.1 to 7.9 inches long. Roman Spatha can be handled one-handed.

Weight of a real katana

The weight of a real katana ranges from 2 to 3.1 pounds or 0.9 to 1.4 kg. This Japanese sword comes with a single-edged, curved blade and it approximately measures 24 to 31.5 inches in length. The hilt of the katana has a circular or squared guard, which requires double hands to operate.

How much does a Gladius weigh

It is a one-handed sword used by the ancient Romans. The swords are not constructed with heavier metals like steel, so the weight ranges from 1.5 to 2.2 pounds or 0.7 to 1 kg. The hilt of these swords is made of bronze, wood, or ivory.

The carbon blade comes with a pointed, double-edged design and measures around 18 to 27 inches. The width of the blade remains around 2 to 2.8 inches. There are four more types included in this category, gladius hispaniensis, Mainz gladius, fulham gladius, and Pompeii gladius.

A short sword is just an opposite type of sword to the longsword as it comes with a shorter hilt. The shorter length of the sword also affects the weight and the weight ranges from 2 to 4 pounds or 0.9 to 1.8 kg.

The sword comes with a double-edged blade with a sharp point, which is 12 to 20 inches long. However, the handle is cross-guard and has pommel like longswords.

Weight of a saber

Sabre is a military weapon that comes with a long cutting edge. The design makes it suitable for one-handed use and on average the sword weighs around 1.1 pounds or 0.5 kg. Sabre often comes with a curved, V-shaped blade, which is 35 inches long. The overall length of the sword is 41 inches approximately.

Basket-hilted swords are similar to claymore, but the difference is that they have a basket-shaped guard surrounding the handle of the sword to save the hand. This two-handed sword weighs around 4.9 to 6.2 pounds or 2.2 to 2.6 kg.

Backsword is a straight-bladed military sword. The blade of these swords is stronger because of having thickened back. The blade comes single-edged and it measures around 33 inches long and 1.375 inches wide down to the hilt. The swords weigh around 2.3 pounds or 1.1 kg.

If you have an interest in knowing the weight of different swords, then you might have already found the article so helpful. Now try collecting some of your favorite models from the swords I discussed.