Falchion is a medieval lightweight, thin, and quick slashing sword. Like most other medieval swords, falchion has also been used in wars and battles. The lightweight and thin design of the sword didn’t make it the primary weapon for the soldiers on the battlefields, rather make it a better second choice.

Also, some other men in the battle used the sword as their third primary choice. One rumor is very common regarding falchion and that is, they are most often compared to machetes. But the reality is, falchion is lighter and thinner than machetes. 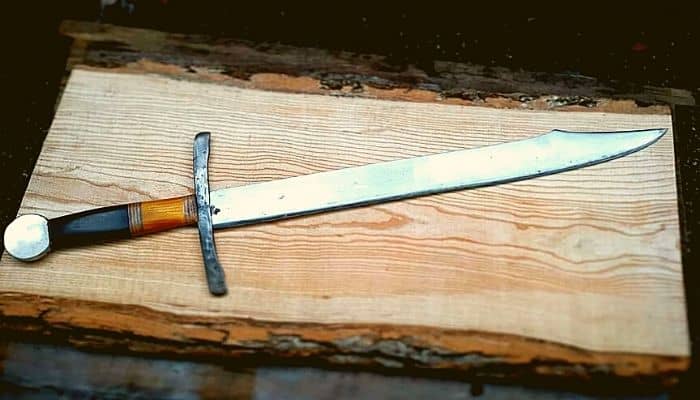 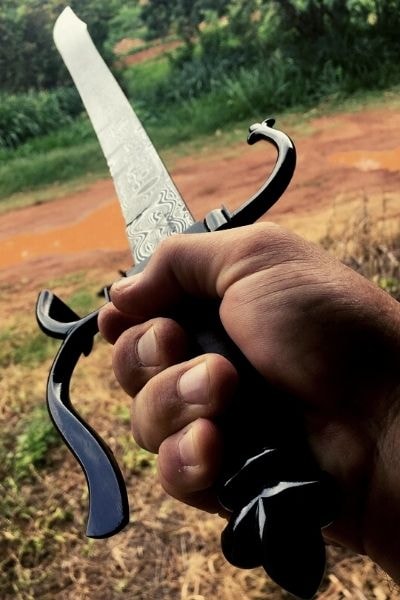 Although it is a lower quality sword compared to the primary swords used on the battlefield, it had a similar hilt design of course. The crossguard in the hilt area provided the user the same feeling of holding a double-edged upper-class sword.

With the crossguard hilt design, a falchion occupies the design of an arming sword. As most versions of falchions have curved blades, in some rare cases they also came with a straighter blade. So overall, the whole design of the falchion makes it look like a high-end word that the knights and soldiers use in the medieval war fields.

Pros and cons of falchion

How many types of falchions are there

According to the researchers and most historians, there are mainly two types of falchions, Cleaver and Cusped.

This is one of the few versions in history that survived. It is more like a large bladed machete, which can be used for chopping. But the blade used in it was thinner and it was only 1.2 mm thick.

The point of the blade had a slight taper leading near the edge before dropping into the secondary level. It was mostly used in the 13th and 14th centuries.

Cusped falchion is mostly inspired by the Turko Mongol sabers. It was also used in the 13th century for the first time. Unlike most falchion versions, this one had a straight blade with a pointed tip. Like most falchions, it weighed around 2 pounds and it was 37.6 inches long approximately.

How long is a falchion

Whether a falchion comes with a curved blade or a straight blade, the length remains almost the same every time. The length of the sword ranges from 37 to 40 inches. However, the blade itself measures from 31 to 34 inches approximately.

So one is sure from the length of falchion is that they are neither a short sword nor a long sword. Their length is enough to use as the secondary weapon by the knights on the battlefields. And as they consist of a lightweight and thinner blade, it’s easier and convenient for carrying.

The thinner and lightweight blade allows the user to slice, slash, and cut through the limbs of the opponent’s body parts. It also has a pointed tip at the bottom of the blade, which also makes it a suitable weapon for thrusting.

While holding a falchion, the medieval knights didn’t have to worry about reaching the target because of the adequate length. And talking about the handle of the sword, it was around 4 to 6 inches with a crossguard hilt. This length of the handle makes it a perfect one for single-handed usage.

How heavy is a falchion

Falchion is not on the heavier side of medieval swords. According to historians, different falchions weigh around 1 to 2 pounds or 0.45 to 0.90 kg. The makers used steel and iron to design different versions of falchion and made it a favorable one for the knights.

The lightweight design of the sword allows the easy carriage to the battlefield, and any soldier can easily take it out to thrust into the opponent. While they provide a good bit of reach, it is also a nice choice for close contact fights.

What is falchion used for

The length, sword weight, and design made this sword an incredible choice for the knights on the battlefield as their most liked secondary weapon. The length is enough for a sword to reach the opponent even standing at a distance. It can easily cut, slice, and slash the target with great efficiency.

Although it is mostly known as a slashing and slicing weapon, the pointed tip in the blade makes it an ideal one for thrusting as well. It doesn't matter whether the version of the falchion has a curved or straight blade, it will have a pointed tip designed at the end of the blade.

In close contact fights, the pointed tip can be efficiently used as the thrusting point. It allowed the medieval soldiers to defeat their enemies by stabbing the weapon inside their bodies. Except for the length and design, the weight also offers something good to the users.

Falchion is a medieval age sword, which was used by the knight and men at arms in the battlegrounds. The sword was used from the 13th to 16th centuries. The knights used falchion as their secondary, whereas the men at arms used these swords as their third primary weapon.

Although falchion was supposed to be a lower-grade weapon on the battlefields in the medieval age, it was also liked for some reasons. And I don’t think you are not aware of the reasons.