Sword is curved for easy cutting and slashing while combat or cavalry charges. These swords have a curved design in the blade. Due to the curved structure, it doesn’t offer that much reach compared to a straight sword. Falchion swords have a slight curve on their blade, and some other swords have quite a noticeable curve.

Throughout the history of cavalry charges and sword fights, straight swords have been the most used ones. But as they aren’t good at slashing, sword fighters relied on curved blades for this. However, curve swords come in handy when the opponent is wearing light armor. 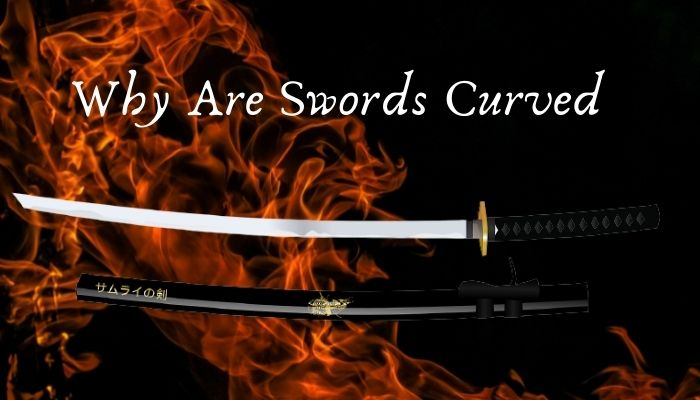 What is a curved sword?

When the blade of a short sword or longsword is curved, it is called a curved sword. A curved sword is a cutting sword, not a thrusting sword. There are both single-edged and double-edged swords available, but curved swords are single-edged. This only allows using the swords one way.

One can have a better cutting and slashing position with the single-edged, curved blade of these swords. The curvy structure of the blade provides adequate sharpness, which helps him outplaying the opponent with ease. However, the reaching issue might hurt at some points with this sword.

The armor your opponent wearing is also a key factor that decides, whether a curve sword is going to be effective or not. It is not a good option when the opponent’s armor is heavier.

What is the reason behind curving your sword?

Not every sword offers you full facilities, because each sword has some certain jobs to do and they are better at doing these. Curve sword is a popular name for slicing, cutting, or slashing. People tend to curve the blade of their sword to get the full cutting service from it.

Prevents from stuck: Most curved blades are single-edged, and they provide one-way service. It is a disturbing situation when the swords are stuck into the object after drawing. But there aren’t such worries when you are using curved. It is not prone to get stuck because of the single-edged and curved blade design.

Great against lighter armor: Curved blades on swords aren’t a suitable option when the opponent is using a heavier armor plate. But when he has just put on simple clothes or lightweight armor, you can rely on curved blades. Then, you don’t need to thrust into the opponent to damage the armor; rather a simple slice will go well in such circumstances.

Curved swords have some certain functionality at which they are better. Definitely, the curvy structure of the sword has a few noteworthy advantages that allow one to rely on this. Let’s break into the advantages of these swords for a clear idea.

Easy access: During armored battles, sword fighters tend to carry one secondary weapon. But it should also allow him to draw it as quickly as possible whether as a defensive or attacking weapon. The curved blade of the sword makes it a compact-sized weapon in the scabbard.

Curved swords come more naturally out of the scabbard compared to straighter ones and seem always ready to cut the limbs of the opponents.

Smaller energy area: With the increasing amount of energy area, it becomes tougher to produce proper swings and cuttings on the target. But curved blades have a smaller area, which allows easy cutting on the target with proper penetration as well. It also doesn’t spread the energy into a large area.

The angle of movement: When you are fighting with a curved sword from one direction, and your opponent has already guarded that angle, you can turn it into another angle for the same movement. Such movements allow curved swords to do certain types of thrust conveniently.

Using false: Not every but curved swords have false edges that one swordsman can efficiently use against the opponent. He can go on to attack the hand or arm area of the opponent with the false edge.

Most curved swords are single-edged, and the thinner cutting edge of the blade is curved. When one draws the blade on any object, it goes through it with more accuracy than straight blades. Moreover, the curvy design doesn't let the sword stick in there after cutting.

It leaves the area immediately after cutting and lets the user use it as a defensive weapon in quick succession as well. Overall, the curved design of the blade made curved swords a better cutting weapon than straight swords.

If you want to find Medieval Helmet see our next article all describe this topic.

Blade design: Curved swords have curved blades, and the blade can be slightly curved or fully curved. However, as the name indicates, straight swords have straight blades.

Cutting: Curved swords are specialized in cutting, slicing, and slashing. Straight swords can also do these things, but the problem arises when the weapons stick on the object.

Penetration: If you want to penetrate the weapon into the opponent by stabbing or thrusting, then a straight sword will be appropriate for you. However, curved swords can also do some efficient or funky penetration during cavalry charges.

Ease of draw: In terms of drawing a sword, a curved one does a far better job than straighter ones. One can draw curved swords more naturally and produce quick swings against the opponent.